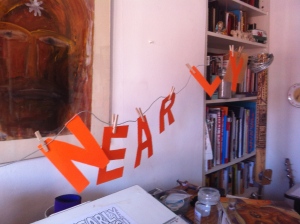 Thanks for visiting Nearlyology.net, and/or signing up to receive the Nearly Newsletter – or for showing enough interest in the project for us to risk sending you a link to this without asking!

On this Nearlyology site we’ll chronicle the growth of my digital novel What Didn’t Quite and the PhD I’m doing in Digital Writing at Bath Spa University, as well as updates on the work of if:book UK and the IFSO Press for which we have exciting plans.  And a big welcome to Luke Roberts,  Collaborative Writer in Residence at IFSO Press and Freya Seward, digital consultant, who joins us as Fictional Editor.

Please visit often – and I hope you might point a few friends at the site and encourage them to send me a nearly story.

I’ve posted the first part of my novel here and would be delighted if you do want to read this and post comments, but be aware it’s by no means the final version. One of the themes of my PhD is how to compose fiction in a way that seems right online, involving collaborators, posting drafts and thoughts as I go along, holding workshops and performances to help me develop the story, then at some point using similar mechanisms to market and promote the novel to as many people as possible –  but not yet. For now I’m hoping a small group of you might be interested to join the conversation and enjoy watching this thing grow – and if not, no problem; I’ll let you know when it’s all done and hope you might like to read it then. I’m also writing Nearly Essays on the process and these will be published on the site too.

News? Well, I’ve written over half of a first draft of What Didn’t Quite, I’ve recorded a batch of Nearly Songs with the wonderful Ifso Band; I’ve run Nearly Days in Bristol and Crouch End and will be doing a nearly event at a conference at Bath Spa University in June. 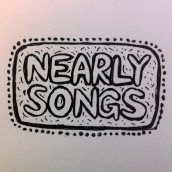 if:book UK, my charitable company exploring the future of the book,  has appointed new trustees George Palmer of the Arvon Foundation, Hattie Coppard, artist, academic and maker of playgrounds; Jo Klaces, inspired teacher of English to replace Sue Horner and Bill Mayblin who are standing down after three years voluntary work supporting if:book’s work, for which I thank them wholeheartedly. With Hattie joining the trustees, we’ll be running more events exploring collaboration and playfulness as well as digital possibilities for literature.

Recently I’ve given a talk on our work to BA students at the University of East London and if:book supported an excellent Read Ahead unconference on digital publishing organised by Chris Kubika with Anna Lewis from Completelynovel.com and Michael Kowalski.

This summer I’m speaking about Nearlywriting and the Future of the Book at the Literature Days in Solothum in Switzerland and planning some exciting Nearly events in London – more details soon. I’m just back from The Hurst, Arvon’s beautiful centre for writers in John Osborne’s old home, now throughly refurbished. As well as running a session with nine mentored writers some of whom I hope to be working with on a collaborative project, I also spent time in this room writing for myself.

Home at if:book towers we’ve had the builders in and my writing studio is taking shape. From June we’re organising regular IFSO SALONS there and will post news of the first one soon. We also held an IFSO WRITERS collaborative writing weekend in Hackney last month out of which has arisen a business idea I’m pursuing with our Collaborative Writer in Residence, Luke Roberts. Watch this space. 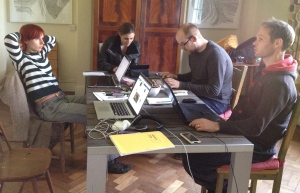 Finally, I love Michael Mitzman’s nearly story which reminds us of the days before everyone began filming everything all the time on their smart phones:

“As far as I remember it was a fine May afternoon in Oxford and my friend, Alan Mclaren and I decided to walk down to the Iffley Road Athletics Meeting as there was a prospect of an exciting mile race, featuring Roger Bannister and Chris Chataway.   I felt a proprietary interest in Bannister as ten years earlier I had each day sat next to him in Assembly at school.     In those days we sat in Houses which was why I, a third former, found myself sitting next to Bannister, a sixth former.    Not only that but we had both participated! In the same cross-country race for the whole school (about 300).    Of course he won.   I finished 270th.

“So I set out with my trusted 8mm. cine camera, made sure I had sufficient film, and off we walked down the High.     But we were less than half way to the track when we saw two girls walking towards us.   One of them was known to Alan, and after a few minutes chat they invited us to tea.

“Such is the fickleness of young men that all thought of the Athletics Meeting was discarded.   We accepted the invitation.  We had tea while Roger Bannister ran the first sub four minute mile.    We had missed being present at (and filming) history being made.

And the girls?   I don’t think we ever saw them again.” 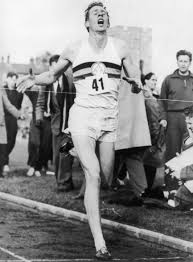 Writer and Nearlyologist View all posts by Chris Ifso