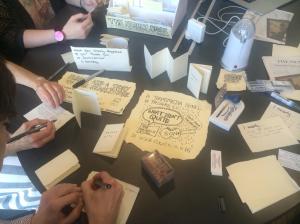 Here’s the Nearly Pod at MIX DIGITAL 15 Conference at Bath Spa University, 2nd-4th July. The conference included presentations by the legendary Blast Theory, Naomi Alderman, Visual Editions, Florian Cramer… and many more. It was great to see Simon Groth of if:book Australia again, to meet up with good friends and make new ones. 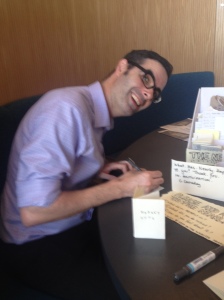 The Nearly Pod, part of an exhibition of digital things, worked very well with people sitting round a table writing and drawing their nearlies. The puppets were much admired too, and I used them in my presentation to the conference about how I’m writing my novel in a transmedia way. I read an extract from the book, perfomed the Nearly Manifesto, shared nearlies gathered – and even sang a little song.

Here are the crop of fascinating nearlies gathered. Thanks to all contributors.

I nearly… became a city cycle courier racing through the streets dodging cars… instead I became an editor – when offered both jobs. Still fancy cycle courier – perhaps later on

I nearly… didn’t get to Istanbul. When I bought my ticket I didn’t know you needed a min of 150 days left on my passport. I had 154 – phew! Then I nearly didn’t get out. Traffic jams all the way to the airport. If it wasn’t for the skills of our ex-military commando taxi driver I might still be there now.

I nearly… went to Manchester (Salford actually). For the simple reason that they ‘headhunted’ me. Instead I held off and was accepted by the art college in Dundee. Look where that got me.   – g.h. tims

I nearly became a biochemist… Instead I changed to study History… and became a journalist… a publisher… a writer… a nearly poet… and nearly many other things… Now I write about the natural world and the essence of living things; instead of their chemistry I try to capture them in words. I think words fit me better.

1) I nearly stayed doing what I was doing, working in a profession I wasn’t happy in, but didn’t have to think too much about.

3) It was the best decision I ever made.

I nearly… told my Indian parents, that I’m not a virgin.

I nearly missed this opportunity for leaving my mark HERE

I nearly… stayed in my perfect life with my wrong husband.

I nearly… wrote something important. something deep that I didn’t want to share, but this nearly project didn’t work for me – nearly got a dark secret but didn’t.

I nearly broke you, one last time, but you wouldn’t come see me.

(This is not a sad story.) Last week I nearly got married. It seemed like a sensible grown up thing to do. We have been almost-married for ten years so it seemed like a good idea. We booked a date at the Registry Office. But that’s all we did. As soon as we did, we both realised at the same moment that we never wanted to get married. We thought we might so we waited. We didn’t invite anyone. We didn’t plan anything. Mostly, we forgot about it and just had fun together instead. We lived our lives wrapped up in each other. We tried to list reasons to get married but couldn’t think of any. So, we cancelled it. I tried to explain to the woman on the phone that we nearly wanted to get married but didn’t really want to. She sounded sad. Her job was about helping people get married.

So, a week ago we nearly got married but we didn’t. I had completely forgotten about that, until this moment. It all seems a bit silly now. Good job we never told anyone else. So, instead we shook hands and agreed to stick together, be kind to each other and not mess this up.   The End.

I nearly… got a job at Oxford Uni. Was second. Now at Bath Spa. V. Happy.

I NEARLY NEVER WON A RACE… I started before the whistle.

I nearly had a transmedia show made – TV drama, TV chat show, internet elements, novel. It nearly happened in Spain with nearly the best production company, distributors etc. It nearly made me feel I’d done what I nearly have done before – shown what I can do. The Spanish crash made this only a nearly. It’s ok though, it grew me and changed everything and I’m nearly settled in that new me.   – Elspeth at Mix

I nearly… caused a fire whilst cooking chicken nuggets. Instead I switched the grill off & ordered Pizza

I nearly… went to east Ukraine now but my family are persuading me not to go because it is too dangerous. So I probably won’t…

I nearly…married a burglar. I didn’t know he was at the time. There was just something off about him. I couldn’t put my finger on it. But it had all happened so fast anyway, so I put a stop to it. Six weeks later I was burgled. My laptops, all the digital gadgets, and my car keys (and my car) all gone.

Then he phoned me and said “I had a premonition, a feeling that something bad had happened.” and he thought I didn’t know. I changed my number.

I nearly… grew up in another country – the country I was born in but moved away from at a young age. This other me, however, still lives there. I am quite sure of it.

I nearly became an antiquarian bookseller, a singleton and a coffee drinker. Instead I set up a business embracing the early morning and thrilled myself with herbal tea.

I nearly had a very serious head injury that almost certainly would have killed me when I fell out of a Range Rover (don’t ask). Instead, I hit my back and the impact my back took, lessened the impact on my head. I was in hospital for a week with a minor head injury and just got out in time to go to university.

THE MAP… (secret map – I’m not drawing it) was beautifully and drunkenly drawn by a colleague I don’t know very well. And I NEARLY told him I love maps but I never use them to find the way, but I didn’t because then he would have stopped drawing and then I wouldn’t have seen the bridge on his map with buildings on it. A bridge I thought I’d dreamt or imagined, but I must have seen it when I last came to Bath when I was 10. As soon as I saw the bridge on his map I remembered the labyrinth but when I pointed to where it would be on the map he said there was a rugby ground there. When I got off the boiling hot train I nearly didn’t use his map because I like to find things by chance, but then I got it out and found the way . I NEARLY didn’t go into the gardens near the bridge because you had to pay, but I paid and I could see the bridge but I couldn’t see the labyrinth but I did get to sit in a deckchair. Then I left the gardens and I NEARLY didn’t look further for the labyrinth in case I had imagined it, but I walked a little further and it was there. I crossed the bridge and found it’s actually a maze. I NEARLY walked round it. WHen I went to Bath and NEARLY walked round the labyrinth (that isn’t actually a labyrinth) thst I’d NEARLY completely forgotten about. I NEARLY didn’t go to the pub because I had to be up early for a conference, but I went. I NEARLY said no to a G&T, but I said yes and that was how I got the MAP…

I nearly didn’t fill this in because of spoiling the blank paper but if I didn’t act and only nearly did this then I realised I wouldn’t be able to join in and I do want to join in – so I will try to do instead of nearly doing! 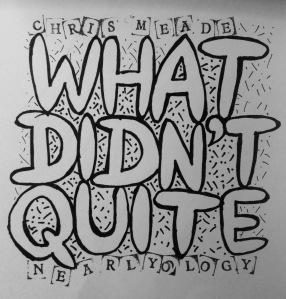 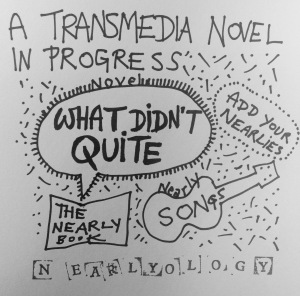 Rough designs for the book app.

Writer and Nearlyologist View all posts by Chris Ifso 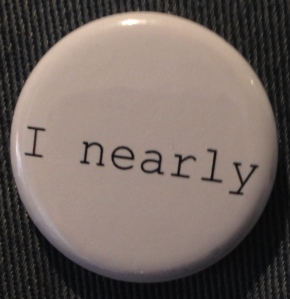